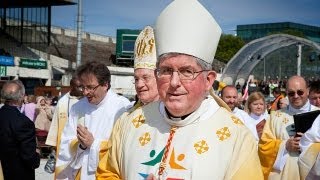 Watch Now
Salt + Light Television is pleased to bring you the Opening Ceremony and Mass from the 50th International Eucharistic Congress in Dublin, Ireland, via our YouTube channel. The homily was given by Cardinal Marc Ouellet, Prefect of the Congregation for Bishops. Note: The Opening Mass begins at 2 hours and 57 seconds. ...read more

His Eminence Marc Cardinal Ouellet Prefect of the Congregation for Bishops Papal Legate to the 50th International Eucharistic Congress June 10,2012 Dublin, Ireland I warmly greet all of you here: my brother bishops and priests, consecrated men and women and the many faithful from Ireland and from around the world who have gathered here for ...read more

Prior to the 50th International Eucharistic Congress, the Salt + Light crew visited a number of historic religious sites across Ireland.  St. Canice’s Cathedral and its Round Tower (photo) are distinct parts of the heritage of the vibrant medieval city of Kilkenny. The tower, which dates from the mid-9th century, is the oldest standing structure in ...read more

Below is the full text of Most Rev. Diarmuid Martin, Archbishop of Dublin. His catechesis was presented earlier today at the Royal Dublin Society arena at the International Eucharistic Congress. Those of us who studied theology, at least here in Ireland, at the time of the Second Vatican Council were greatly influenced by the Council’s ...read more

In 1912, St. Peter’s Seminary opened its doors in London, Ont. One hundred years and 1,036 priests later, the seminary community celebrated its centennial anniversary with a Mass of Thanksgiving inside St. Peter’s Cathedral Basilica on Wednesday, May 23. As the lead Producer for this project, I had the great privilege of representing Salt + ...read more

Throughout this past week in the daily gospel readings for mass, we have been working our way through Chapter 17 of St. John’s Gospel, a passage known as Jesus’ great priestly prayer. Quite providentially, these readings bring us up to the feast days of three important “priestly” saints: St. Bede the Venerable, Pope St. GregoryVII, ...read more

Long-term sustainability of the Church’s mission
Sebastian Gomes
May 24, 2012

This article was first published in L’Osservatore Romano, no. 21, on Wednesday, May 23, pg. 9. It is written by Salt + Light’s very own Sebastian Gomes. Click here to see all his blog posts. When our most distant ancestors awoke on the first Easter morning, they could not have imagined what took place during ...read more 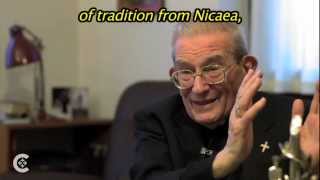 Watch Now
Catholic News Service recently interviewed 97 year old Archbishop Loris Capovilla. Archbishop Capovilla was prelate of the sanctuary of the Holy House of Loreto, Italy for many years. Before that however, he was the personal secretary to Pope John XXIII. He had a privileged vantage point for Vatican II, he saw the circumstances that lead ...read more 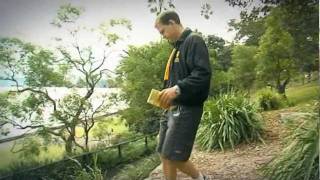 Watch Now
Have you ever wondered what it would be like to be a Catholic priest? People have many different ideas about the priesthood – highly revered, considered peculiar, disregarded as irrelevant or simply misunderstood. On the other hand, many people have an idea that priesthood is a boring and secluded way of life! Think again. Come ...read more
We use cookies and similar technologies to run this website and to help us understand how you use it. Read our Privacy Policy here to learn how we use cookies.