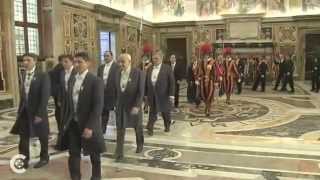 Watch Now
The pope creates and advisory panel Eight Cardinals from around the world have been asked by Pope Francis to advise him on reforms to the Roman Curia. The Vatican announced April 13 that Pope Francis had appointed eight cardinals to be part of an advisory panel to help him make changes to “Pastor Bonus,” ...read more