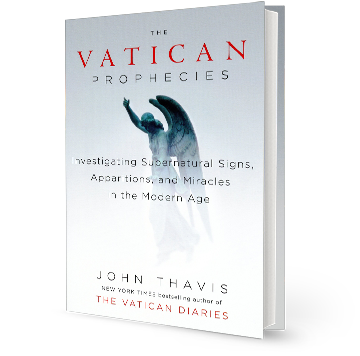 Apocalyptic prophecies and miraculous apparitions are headline-grabbing events that often put the Catholic Church’s concept of “rational faith” at odds with the passion of its more zealous followers. To some, these claims teeter on the edge of absurdity. Others see them as evidence of a private connection with God. For the Vatican, the issue is much more nuanced, as each supposed miraculous event could have serious theological and political consequences. In response, the Vatican has developed a highly secretive and complex evaluation system to judge the authenticity of supernatural phenomena. In “The Vatican Prophecies,” John Thavis takes us behind the scenes at the Vatican to explain how miracles and other “supernatural” events are investigated and verified, revealing deep internal debates on apparitions, the power of religious relics, private revelations, exorcisms, and more. Enlightening and accessible, the book illustrates the Church’s struggle to balance the tension between traditional beliefs and contemporary skepticism.

My Take
In a modern, scientific age, how does the Vatican deal with alleged supernatural events? Marian apparitions, relics, exorcisms and more are explored in detail from the perspective of proponents and skeptics in John Thavis’ book The Vatican Prophecies. Interestingly, the Vatican has no formal verification process for evaluating the authenticity of these events, but instead exercises a kind-of cautious ambiguity on a case-by-case basis. Not surprisingly, there are few simple answers when it comes to these supernatural events, and that’s one of the reasons you won’t be able to put this book down.
“What makes this book a page-turner that many will find difficult to put down are its countless stories about the work, convictions and religious experiences of real people. The Vatican Prophecies examines a question that Thavis says Catholic thinkers and officials are trying to answer with mounting urgency: In the 21st century, can the miraculous and the reasonable peacefully coexist?”


Catholic News Service
About the Author
John Thavis is a journalist, author and speaker specializing in Vatican and religious affairs. He is known in the trade as a “Vaticanista,” a calling that became clear only after a circuitous career path. In 1983 he took a reporting job with Catholic News Service and began covering the Vatican daily. He traveled with Pope John Paul II and Pope Benedict XVI to more than 60 countries, and reported on other religious stories from Europe, the Middle East and Africa. He became CNS Rome bureau chief in 1996, and served three years as president of the Association of International Journalists Accredited to the Vatican. In 2012 Thavis retired from his CNS position to devote full time to writing. His book, “The Vatican Diaries,” was published Feb. 21, 2013, by Viking-Penguin and immediately became a New York Times best-seller. His new book, “The Vatican Prophecies: Investigating Supernatural Signs, Apparitions, and Miracles in the Modern Age,” is based on research and interviews with leading Vatican officials, experts on miracles and demonology, Catholic visionaries and others. 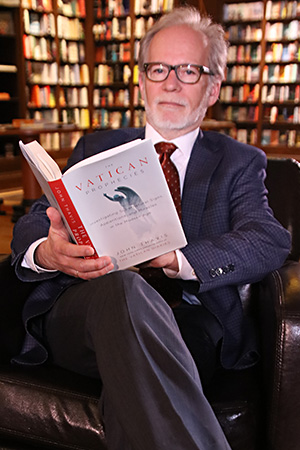