A Hand of Peace: Pope Pius XII and the Holocaust 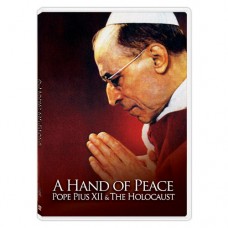 
Pope Pius XII guided the Catholic Church through two tumultuous decades, firmly establishing himself as a champion of peace, and the moral voice of a world torn apart by war. However, shortly after his death in 1958, his heroic legacy has been called into question by some historians who claim that his alleged “silence” during the Nazi holocaust allowed Hitler to carry out his Final Solution against the Jews. Pope Pius XII protested vehemently the persecution of Jews. His was a prophecy in action, which saved the lives of countless victims of the neo-pagan Nazi reign of terror, rather than potentially counter-productive public statements.

“A Hand of Peace: Pope Pius XII and the Holocaust” is an important contribution to the robust and timely debate that has arisen surrounding Pius’s wartime record. Featuring interviews with world renowned Holocaust historian Sir Martin Gilbert; the Jesuit historian and postulator Fr. Peter Gumpel; author and ardent Pius defender Sr. Margherita Marchione, M.P.F., Ph.D., this gripping documentary explores the difficult choices Pius XII faced during the Second World War, and provides convincing proof that his bold, yet discreet, prophetic actions saved tens of thousands of Jewish lives and paved the way for a new era of Catholic-Jewish relations that have deepened over the past 50 years.