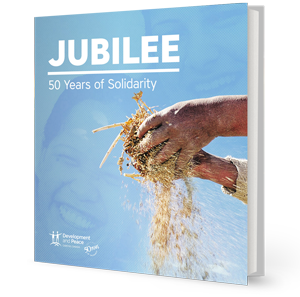 In 1967, the Canadian Catholic Organization for Development and Peace was launched by the Canadian bishops as a creative new way to assist, and stand in solidarity with the poor and oppressed peoples of the Global South. This beautiful coffee table book brings together hundreds of photographs and original articles by different writers to paint a picture of this faith-based justice organization as it turns fifty. Jubilee: 50 Years of Solidarity tells this story in three chapters that focus on the nationwide movement for social justice, the partnerships that give power to the excluded, and the advocacy campaigns which strive to make governments and corporations accountable to the people they impact. The last chapter entitled “Renewal” looks at recent campaigns that will shape the future programs of the organization, including climate justice and walking with Indigenous peoples. (Novalis)

My Take
For fifty years, the Canadian Catholic Organization for Development and Peace has been partnering with the poor throughout the Global South to support their effort to rise out of poverty and fight structures of injustice. Jubilee: 50 Years of Solidarity is a highlight reel of the countless campaigns and partnerships that have been built, with plenty of powerful stories of transformation and hope.
About the editor
Danny Gillis joined Scarboro Missions as a lay missioner in 1984. He spent three years living among the Manobo, who live in the mountains of Mindanao, Philippines. He also worked in Scarboro’s Office of Lay Association. In 1992 he began working with Development and Peace in Toronto, first as coordinator of animators, then as education program coordinator. Then he moved back to his home town of Antigonish, Nova Scotia, and in 2007 took on the role of Development and Peace animator for the Atlantic provinces. In 2015 he was asked to coordinate the organization’s 50th anniversary program. Danny has a Bachelor of Business Administration (St. F. X. University) and a Master of Adult Education (O.I.S.E) and has written or coordinated three books, including a novel, Where the Rivers Meet, published in 2016 by MacIntyre-Purcell. 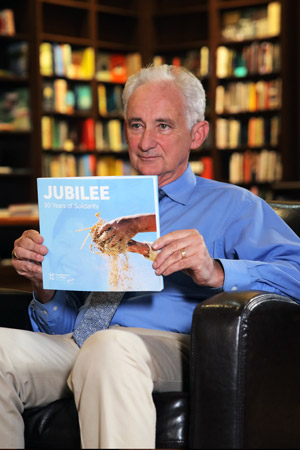 Jubilee: 50 Years of Solidarity paints a picture of Development and Peace by examining three of its essential aspects: Movement, Partnership and Advocacy. Without a deep appreciation of these three aspects, we cannot hope to understand Development and Peace nor how it has lived out the vision that inspires us. Through 50 articles, stories mostly, we show how our vision has been and is being realized.”