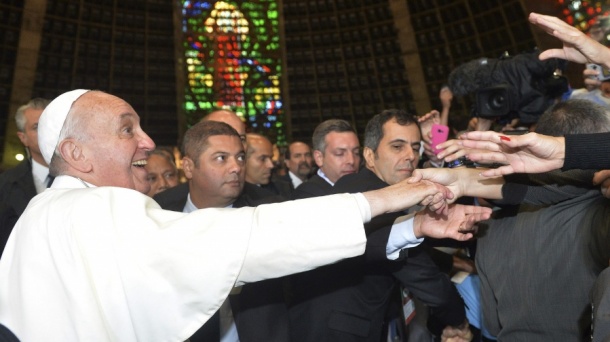 Yesterday Pope Francis held a special, impromptu meeting with the youth of his native Argentina in the Cathedral of St. Sebastian in Rio. Below is Vatican Information Service's account of this joyful occasion as well as full text of the Holy Father's remarks in Spanish and Italian.
"I WANT THE CHURCH TO GO INTO THE STREETS"
Vatican City, 26 July 2013 (VIS) - Yesterday Pope Francis added a new activity to the official programme; he visited the Cathedral of Rio to greet his Argentine compatriots, to whom offered an impromptu address. The Holy Father thanked the young people who had come to greet him and spoke to them colloquially. "I want the Church to go out into the streets, I want us to defend ourselves against all worldliness, opposition to progress, from that which is comfortable, from that which is clericalism, from all that which means being closed up in ourselves. Parishes, schools, institutions are made in order to come out - if they do not do this, they become a non-governmental organisation, and the Church must not be an NGO."
"I think that, at this time, this global civilisation has gone beyond its limits; it has gone beyond its limits because it has created such a cult of money, that we are in the presence of a philosophy and a practice of exclusion of the two poles of life which are the promises of the populace. The exclusion of the elderly, obviously. One might think that there exists a sort of hidden euthanasia; or rather, that we do not take care of the elderly. But there is also a cultural euthanasia, because we do not allow them to speak, we do not allow them to act. And then there is the exclusion of the young. The percentage of young unemployed is very high, and we have a generation without experience of the dignity one earns through work. This civilisation, that, is, which has led us to exclude the two peaks that form our future."
The Pope encouraged the young to rise, to make themselves recognised, to fight for their values, and urged the elderly to speak, to teach us and to transmit their wisdom. "In the Argentine people, I ask the elderly with all my heart: do not disappoint in your role as the cultural reserve of our people, a reserve that transmits justice, that transmits history, the transmits values, that transmits the memory of the people. And you", he said, addressing the young, "please, do not oppose yourself to the elderly: let them speak, listen to them and proceed. But know that in this moment you, the young, and the elderly, you are condemned to the same fate: exclusion. Do not allow yourselves to be excluded. Is this clear? It is for this, I think, that you must strive."
Francis emphasized that faith is not a joke, but is rather a very serious matter. "It is a scandal that God made Himself one of us. It is a scandal that he died on a cross. It is a scandal: the scandal of the Cross. But it is the only sure path: that of the Cross, the path of Jesus, that of the incarnation of Jesus. Please, do not 'liquidise' your faith in Jesus Christ. We liquidise oranges, apples, bananas, but please - do not drink liquidised faith. Faith is whole, it cannot be liquidised or reduced. It is faith in Jesus. It is faith in the Son of God made man, who loved me and died for me. So, make a fuss! Take care of the extremes of the population, the elderly and the young! Do not let yourselves be excluded, and do not exclude the elderly. And secondly: do not liquidise your faith in Jesus Christ."
Full text in English: 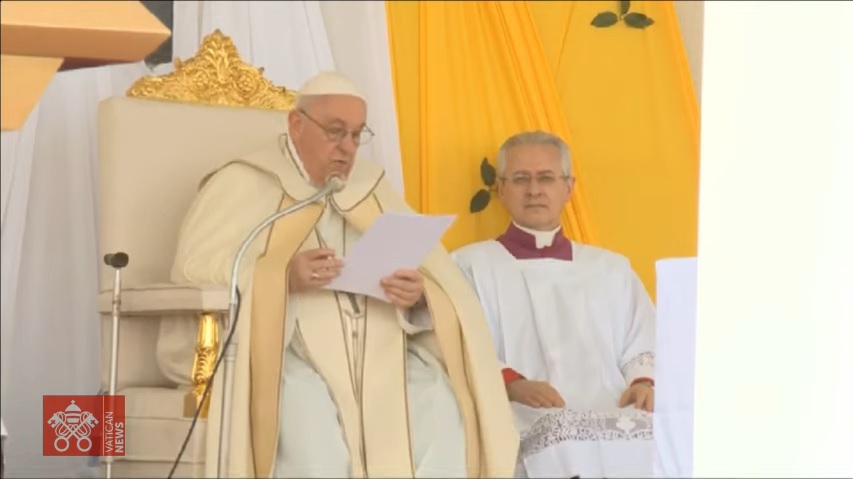 Pope Francis concluded his Apostolic Visit to the Democratic Republic of the Congo and South Sudan on February 5. He gave the homily at Holy Mass at the John Garang Mausoleum in Juba. Read the full te ...read more 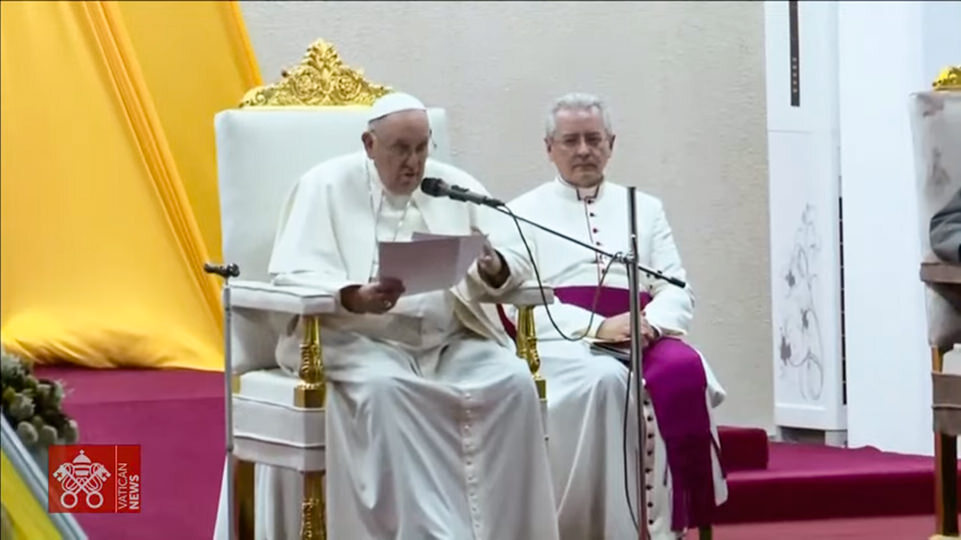 On February 4, 2023, Pope Francis participated in a prayer meeting with the Archbishop of Canterbury, the Moderator of the Church of Scotland and others, as part of their Ecumenical Pilgrimage of Peac ...read more 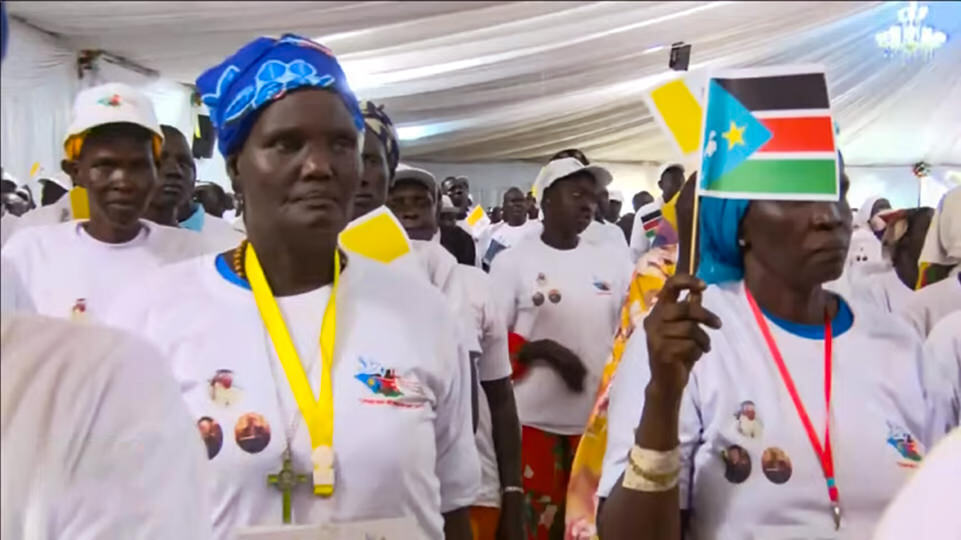 On Saturday, February 4, Pope Francis, with the Archbishop of Canterbury and the Moderator of the Church of Scotland, heard from and responded to internally displaced persons and representatives of hu ...read more 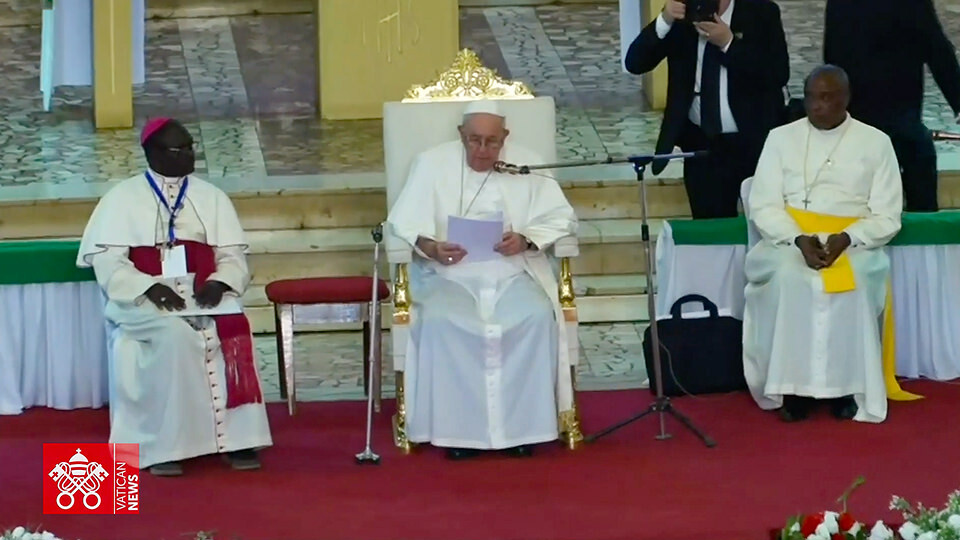 On February 4, 2023, Pope Francis met with clergy, religious and seminarians in the Cathedral of Saint Therese in Juba, South Sudan. In his address, he reflected on the example of Moses as intercessor ...read more

Meeting with the Authorities and Diplomatic Corps of South Sudan: Address of His Holiness
Pope Francis 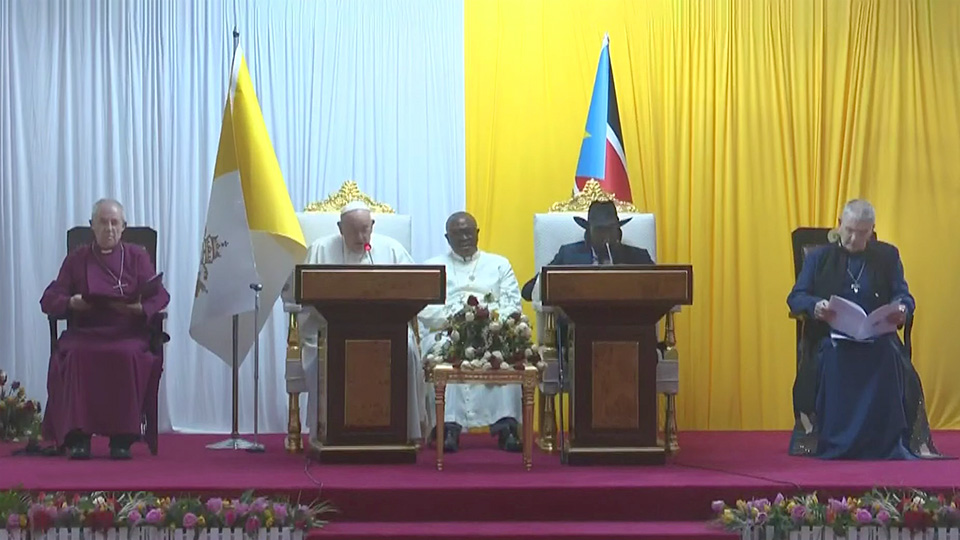 Pope Francis began his Apostolic Visit to South Sudan on February 3. The Holy Father, with the Archbishop of Canterbury and the Moderator of the Church of Scotland, met with the President, Vice-Presid ...read more
read more
We use cookies and similar technologies to run this website and to help us understand how you use it. Read our Privacy Policy here to learn how we use cookies.